Greetings again from the darkness. Having first been drawn into this film by watching it on a 13 inch black and white TV in my dorm room, I have long wanted to experience it on a larger, full color screen. With this “dream” finally attained, the film remains a very odd, hypnotic, stylistic 1960’s film. Based on a John Cheever short story published in the “New Yorker”, it works as a dual allegory to: the failed American Dream and one man’s life.

Burt Lancaster stars as Ned Merrill, a long-lost neighbor who shows up one morning to take a swim at the house of some friends. A little conversation leads to the formulation of Ned’s plan to “swim home” through each of the backyard pools in the valley. This is a chlorinated road trip and it’s quite an adventure. Along the way, Ned meets those that are happy to see him and those that aren’t. The former babysitter (Janet Landgard) follows him for part of the trip. He 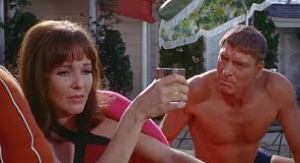 also has an extended visit with a former lover (whom he clearly spurned) played by Janice Rule (pictured left) … a visit that starts poorly and goes downhill from there.  Various other interactions occur during his pool crawl, including some face time with a young Joan Rivers (who plays a pool party girl).

As we can tell from the delivery of the dialogue, something isn’t quite right with Ned. He has been “missing” for awhile and he seems to be oblivious to the changes in his life, while everyone else is quite aware. It seems Ned is swimming right through the stages of his life. The movie takes him: from morning to evening, from sunshine to rain, from warm to cold, from energetic to tired, and from healthy to hurt. By the end of his trip, we understand the current state of Ned’s life, even if he prefers to believe his wife and daughter remain part of his idealistic suburban paradise.

Eleanor Perry wrote the screenplay, while her husband Frank Perry (Mommie Dearest) directed. They also collaborated on Diary of a Mad Housewife. A minor bit of trivia notes that Fred was singer Katy Perry’s uncle. Due to creative differences with Lancaster, Mr. Perry left the film before it was completed. Sydney Pollack was brought in to re-shoot the scene with Lancaster and Ms. Rule. It had previously been shot with Barbara Loden. A 24 year old Marvin Hamlisch composed the somewhat heavy-handed score … it was the first of many film scores he would compose.

This is an unusual looking film – very stylistic and impressionistic for the times. It flows more like a play than a traditional movie and the dialogue is more literary than conversational. Lancaster’s performance is exceptional, and it should be noted, he was 52 years old at the time of shooting. If you have seen the movie, you understand why that is so impressive.

This entry was posted on Sunday, December 1st, 2013 at 10:36 pm and is filed under Classics, Drama, Fantasy. You can follow any responses to this entry through the RSS 2.0 feed. You can leave a response, or trackback from your own site.