Early this morning, word of the passing of Elmore Leonard started making its way through news outlets and Twitter.  He was 87 and died of complications from a recent stroke that had initially been reported as “not too serious”.   Mr. Leonard was one of the great American writers, and though his writing spanned more than sixty years, he may never have been more popular than today, thanks to the TV series “Justified“.

Mr. Leonard served in the Navy during WWII, and worked in advertising after graduating from the University of Detroit.  His family moved to Detroit when he was very young and he lived there the rest of his life, mostly in the township of Bloomfield Hills.  He described the city as inspirational and it often played a key role in his stories.  Mr. Leonard began writing Western stories and recalled selling the story for “3:10 to Yuma” for $90.00

With 45 published novels and countless short stories and articles, Leonard was incredibly prodigious as a writer and dedicated to writing every day.  His routine included long-hand on a yellow pad, followed by typewritten pages (never a computer).  When he made the move from Westerns to Crime stories, his “The Big Bounce” was rejected 84 times, a reminder of the incredibly complicated industry.

Hollywood loved Leonard’s style, colorful characters, black humor, and intricate plotting. Some of the best adaptations of his work include:

“Justified“.  The TV series from creator Graham Yost revolves around Deputy U.S. Marshal Raylan Givens, one of the more interesting and entertaining characters as portrayed by Timothy Olyphant. The series specializes in bad guys who are often as clever as the good guys … as evidenced by the terrific Walton Goggins as Boyd Crowder.

Jackie Brown (1997).  Quentin Tarantino’s only directorial effort involving material he did not write. Leonard’s novel “Rum Punch” provides the foundation for this twisty thriller and the antics of Pam Grier and Samuel L Jackson.

3:10 to Yuma (1957, 2007). Not very many writers are involved with film adaptations of their work across a 50 year span. Director Delmer Daves directed Glenn Ford and Van Heflin in the original, and director James Mangold followed up 50 years later with Russell Crowe and Christian Bale. Both are tense thrillers with moral statements.

Hombre (1967).  Paul Newman stars in this fine western directed by Martin Ritt. Human nature is on full display from this Leonard novel.

Get Shorty (1995).  John Travolta stars as an out of his element (or is he?) mobster when he heads to Hollywood to collect a debt. The supporting cast is exceptional and director Barry Sonnefeld perfectly captures the finest Leonard comedic dialogue.

Out of Sight (1998).  George Clooney and Jennifer Lopez, in their sizzling onscreen best, star in a movie that oozes style from director Steven Soderbergh.

Premiering this year at the Toronto Film Festival will be the latest screen adaptation of a Leonard work, Life of Crime.  It stars Jennifer Aniston and is based on Leonard’s novel “The Switch”.   Not surprisingly, there are numerous other works in progress (mostly TV) that take advantage of Leonard’s talent.

Elmore Leonard’s efficiency with words is renowned and he often said that he “tries to leave out the parts that people skip”.  Clearly a man who understood not just writing, but what makes reading enjoyable.  My favorite of his quotes: “If it sounds like writing, I rewrite it”.  That’s a lesson we hope carries through to future generations of writers. 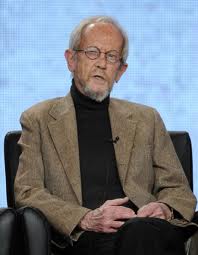 This entry was posted on Tuesday, August 20th, 2013 at 1:13 pm and is filed under Articles. You can follow any responses to this entry through the RSS 2.0 feed. You can leave a response, or trackback from your own site.

One Response to ELMORE LEONARD remembered