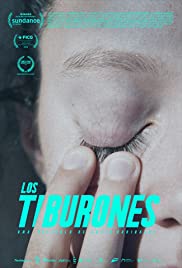 Greetings again from the darkness. Uruguayan writer-director Lucia Garibaldi has seemingly designed her first feature film specifically for film critics at festivals (it was well received at Sundance). I can’t recall a coming-of-age film with a less-accessible lead character, nor one that displayed that awkward phase between child and adult in a harsher manner. Watch that emotional step – it’s a doozy!

First time actress Romina Betancur plays 14 year old Rosina. The opening finds her running from her angry father right into the sea. It’s at this point she spots the dorsal fin of a shark. Of course no one believes her because sharks are not known to swim around this fishing village in Uruguay. We also learn that Rosina has recently caused an eye injury to her sister Mariana (Antonela Aquistapache), and Rosina claims it was an “accident.” It becomes apparent that her actions are not always the result of wise planning.

Rosina begins working on one her father’s labor crews as the town prepares for the summer visitors. Also on the crew is Joselo (Federico Morosini), an older boy in whom Rosina shows an interest. After their unconventional “date”, Joselo bores of the youngster, while she is rendered both curious and confused. Rather than a sexual awakening, Rosina seems to experience internal prods of which she is unsure how to handle. This transition phase is shown through the perspective of an awkward 14 year old girl who seems to handle everything with a constant stone-face … the envy of any poker player.

Once Joselo’s interest level shifts to others, Rosina fights back in what apparently is her dark nature. Some could call her a psychopath, as her instincts prove ill-advised at best, and possibly even flat out dangerous. Her quiet predator similarities to the shark are obvious, even as the question of ‘shark or no shark’ cloaks the community. Life in this area is not easy. Water is scarce, and these folks have no time to wrestle with Rosina’s twisted ways. Her mother is opening a new salon, and even a pregnant dog has a role in Rosina’s revenge plan.

Uruguay’s rocky coastline and wooded forests make for a picturesque background, and Ms. Garibaldi and cinematographer German Nocella take full advantage. The many tight shots of Rosina are meant to emphasize her isolation and separation, but at times it felt like this shot was used a bit too frequently. The electronic music was often distracting, and the slow pace certainly could have worked if the character development of Rosina had allowed us to better grasp her emotions and thoughts. Instead, the film is either restrained or dull, depending on your taste … although the flashes of humor certainly help. Director Garibaldi may relate to Rosina, but we never do. We are left thinking this could have been an extraordinary short film.

This entry was posted on Monday, April 13th, 2020 at 8:12 pm and is filed under Drama, World Cinema/Foreign. You can follow any responses to this entry through the RSS 2.0 feed. You can leave a response, or trackback from your own site.