DOOMED! THE UNTOLD STORY OF ROGER CORMAN’S THE FANTASTIC FOUR 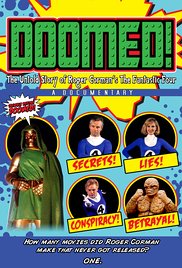 Greetings again from the darkness. Most people over age 30 remember the release of Tim Burton’s Batman Returns, the sequel to his 1989 hit. The film’s budget was $80 million, which seems remarkably low compared to the $250 million (or more) budget of today’s superhero and comic book film adaptations. Putting all of that in perspective, and providing the best ever look at low budget filmmaking, comes this documentary from director Marty Langford. It’s a look back at the ONE million dollar production of Marvel’s iconic The Fantastic Four (the same year as Batman Returns), and how backroom negotiations provided a stake to the heart of those involved.

We are shown a quote from Stan Lee: “The movie was never supposed to be shown to anyone.” It’s a quote that we understand by the end of Langford’s story, but still makes little sense. In 1992, producer Bernd Eichinger realized his rights to these famous Marvel characters were expiring at year end. He contacted the master of “B” movies, Roger Corman, who gave his production team one weekend to come up with a workable plan. What followed was the “movie magic” that we rarely glimpse. Even with that low budget, the script was written, the movie was cast and shooting began (with no rehearsal) … the ultimate rushed production.

The documentary connects the dots between Eichinger, Corman, Troma Entertainment, Marvel Studios, Neue Constantine Films, and Avi Arad; however, the real heart and soul comes courtesy of the interviews with the actors and production crew who were so involved. Looking back with nostalgia, pride and frustration, these folks clearly represent the “get it done” attitude that is so crucial in low budget filmmaking. Their disappointment in never having the film released is evident a quarter century later in their words and their faces.

In what could be described as a conspiracy … though more appropriately as yet another clash in the age old art vs. business battle … the cast and crew were manipulated into believing the film would be released. Many made publicity appearances at festivals, and a trailer was cut and shown in many theatres. Unfortunately (for all but a few), the production was merely a ploy to drive up the demand and cost for the rights … as Avi Arad envisioned a slick, high-budget version of the franchise (there have been two failed versions in the years since).

Some of those interviewed include director Oley Sassone, editor Glenn Garland, Joseph Culp (Doctor Doom, son of Robert Culp), Jay Underwood (Johnny Storm), Alex Hyde-White (Reed Richards), Rebecca Staab (Sue Storm), Michael Bailey Smith (Ben Grimm), and Carl Ciarfalo (The Thing). We mostly get the viewpoint of those who were so close to the film, though there is a brief clip of Roger Corman claiming he was under the impression that it was a legitimate film project … this despite his healthy cash out.

Since a copy of the film was “rescued” by the director and editor, it has become something of an urban legend among the comic book fan base … a cult film that never had its day on the big screen. The best comparison might be a bootleg version of a deep cut of a Springsteen song in the 1970’s. Everything gets released today, but in those days, studios had a way to control what was seen (and what wasn’t). This is a well made documentary on an unusual topic – and a reminder that the artists just want their work seen, while the business side just wants the money.

This entry was posted on Saturday, October 15th, 2016 at 4:49 pm and is filed under Documentary. You can follow any responses to this entry through the RSS 2.0 feed. You can leave a response, or trackback from your own site.